This report can be downloaded from the original publisher.

The mobile Internet is already generating some $700 billion in revenues annually and that is set to grow as adoption of mobile devices continues to rise.

In this 2015 study, the Boston Consulting Group surveys 13 countries, representing about 70% of world GDP, and finds that the mobile Internet is already generating some $700 billion in revenues annually. That is the equivalent of $780 for every adult in the sample. By 2017, BCG estimate that revenues from the mobile Internet will have grown to $1.55 trillion across the sample countries, an annual increase of 23%. Apps, content, and services will be the largest contributor to this revenue growth, with the rapid expansion of mobile shopping and advertising playing a particularly significant role. 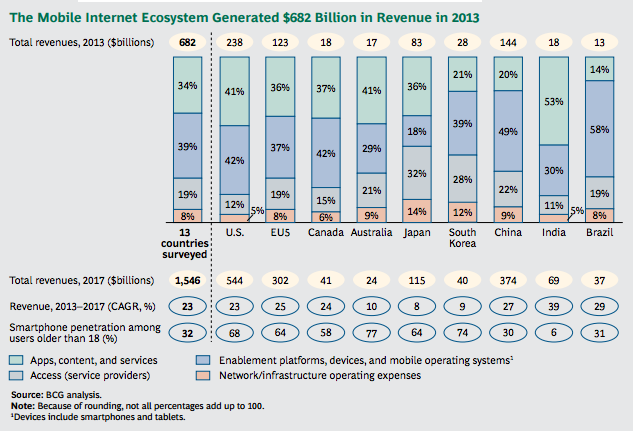 These new technologies are providing mobile users from both the developed and developing world with continuous access to information, communication, friends and entertainment - among myriad other things. The BCG survey finds that across the 13 countries, the consumer surplus of the mobile Internet is approximately $3.5 trillion a year. That is about $4000 per person, seven times what consumers pay for devices and access.

The new technologies have unleashed a flourishing app economy, with more than 200 billion cumulative app downloads from the various app stores since 2008. More than 100 billion of these downloads took place in 2013 alone. Leading app-store operators paid developers more than $15 billion between June 2013 and July 2014. BCG also finds that the mobile Internet has also created 3 million jobs in the 13 countries - these jobs are primarily in device sales, distribution, and production, as well as in content and services, service providers, and network infrastructure.

“It took more than a decade to reach 1 billion units but it will only be three years before we reach the next billion.“

The growth of the mobile internet economy is set to continue as smartphones become more affordable and accessible - BCG forecasts that worldwide smartphone prices will fall a further 19% by 2017. Policymakers can help propel this growth by pursuing proven policy goals that encourage continued improvement in these areas, from promoting high-speed infrastructure to putting a priority on digital education and skills building. BCG forecast that in 2017, global smartphone penetration will have doubled from 1.5 billion to 3 billion or 35% of the world population. It took more than a decade to reach 1 billion units but it will only be three years before we reach the next billion.